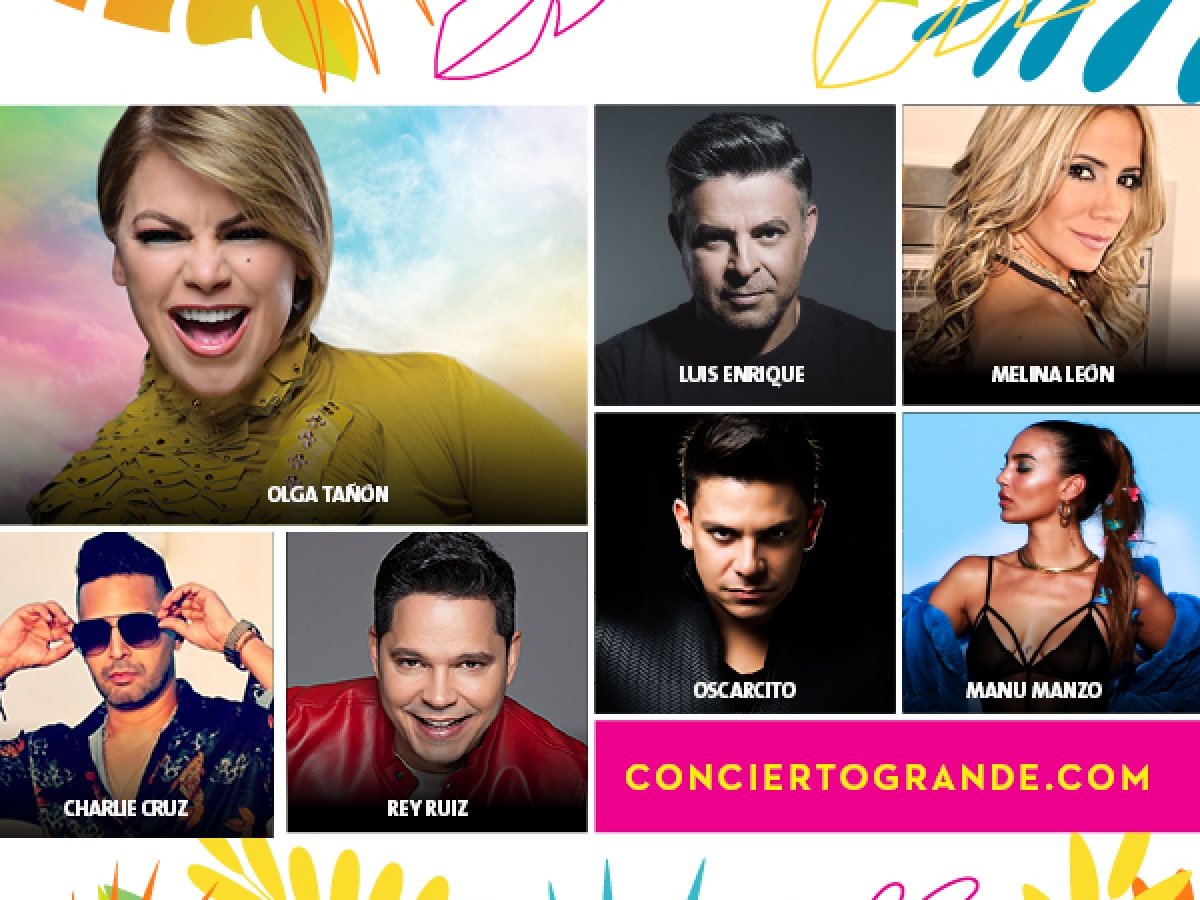 Olga Tañón: A best-selling, award-winning Puerto Rican tropical and Latin pop singer, songwriter, and set designer, Tañón has, since 1992, sold millions of recordings across the globe. Throughout her career, "La Mujer de Fuego" (the woman of fire) has been awarded seven gold and five platinum albums. She was the first female Puerto Rican artist to be certified gold in the United States, selling more than 500,000 units of the 1996 album "Nuevos Senderos." She is the winner of numerous Grammy and Latin Grammy awards, and has placed nearly 40 singles on the Hot Latin Songs chart. She returned in 2015 to give two historic concerts – Promesa Fulfilled – with over a million attendees.

Luis Enrique: Luis Enrique has won three Latin Grammys, one Grammy, three "Lo Nuestro" awards, four Latin Billboards, two Ronda awards, as well as the recognition of the Huaco awards, TVyNovelas, Aplausos, ACE y ASCAP. After becoming the most revolutionary figure in the salsa scene in the 1980s, LUIS ENRIQUE went through a period of nine years without recording, although he never left the stage. His most recent production, "Jukebox – First Edition," brought an innovative concept in his career in which for the first time he interpreted musical successes as pure salsa.

Rey Ruiz: Born in Havana, Cuba, Rey Ruiz has been a prominent figure in the romantic salsa scene since the early 1990s, earning the title of "El Elvis de la Salsa" for some and "El Bombón de la Salsa" for others. His record career began with an album that bore his nickname "Rey Ruiz" in 1992, in the 1950s mambo style and went platinum. He also won the Billboard and "Lo Nuestro" awards with several successful songs. He then participated in the "Los Soneros de Hoy" project, which was in honor of the salsa pioneers of the 1960s and 1970s. The project album included Ruiz singing "Compone un Son.

Melina León: Melina León began her professional career as a teenager in musical groups such as Las Cherís and Rubí, Las Chicas de Puerto Rico, Merengue Orchestra and Paparazzi. In 1997 she became a soloist with her first production "Mujeres Liberadas," which represented the beginning of an ascending and successful artistic career. In 1998, she released her second album, "Con los pies sobre la tierra," which won numerous awards. In 2010 she recorded her third production "No Seas Cobarde" and was nominated and won "Premios Lo Nuestro" as tropical artist of the year.

Charlie Cruz: With only his second album as a soloist, "Imaginate," Charlie Cruz hit the international scene. With the WEA Latina label, the production was helped by Sergio George who directed and arranged. In that album, Cruz was co- songwriter of "Y gritaré," together with Guadalupe García and Sergio George. His latest release is "Asi Soy" featured the song "Hoy es el Dia." His other notable hits include "Bombon de Azucar," "Amarte es un problema," and "Dejala que Baile."

Oscarcito: Oscar Hernández, better known as Oscarcito, is considered one of the soloists of the new generation, after a solid career in the A.5 group and with the successful duo Franco and Oscarcito. The Caracas, Venezuela native has release singles that have achieved international fame, such a "Tumbaye," "Tu Eres Perfecta" and "No Te Tengo A Ti" while also collaborating to produce songs for artists such as Jennifer Lopez, Will Smith and Marc Anthony, Victor Manuelle and Thalia.