Information on the Western Everglades and Ten Thousand Islands 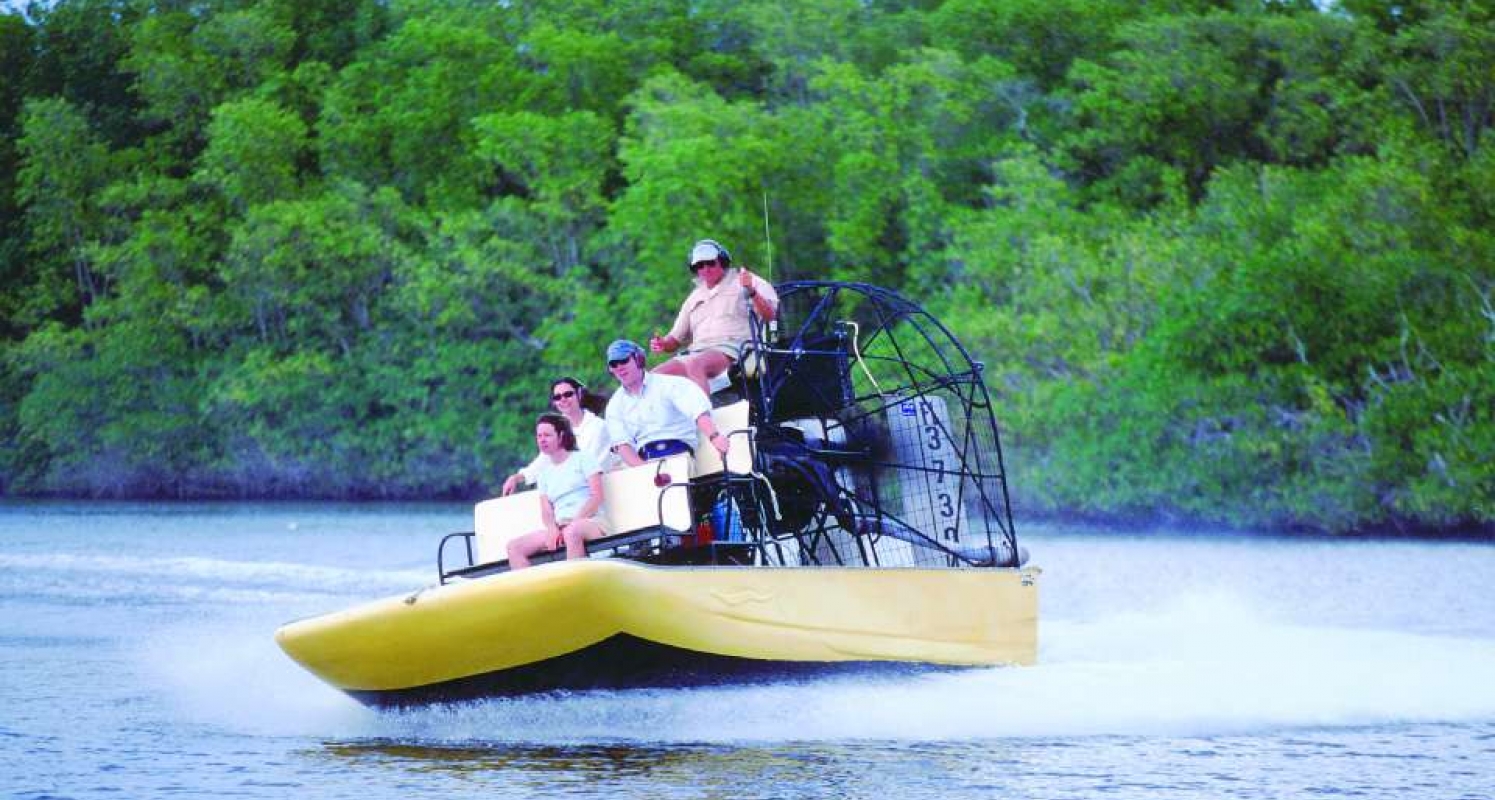 Everglades City and nearby Chokoloskee Island provide a glimpse into Southwest Florida's past, with museums and small town charm. Known as the Stone Crab Capital of the World, Everglades City's stone crab processing facilities provide ample supplies of this Florida delicacy to restaurants in town and all along Florida's coast during stone crab season each year from October 15 through May 15.

While still enjoying the slow pace of a rural village, Everglades City underwent something of a renaissance in recent years due to escalating real estate values. As waterfront property skyrocketed in demand, the town's small bungalows began to be replaced by elegant multi-story Florida Cracker-style homes overlooking the Barron River.

At the turn of the century, Everglades City was a boomtown during construction of the Tamiami Trail highway. In later years, residents turned to hunting and fishing to support their families. Hunting restrictions came with the establishment of Everglades National Park in 1947, and with the passage of a ban on gill net fishing in 1994 in Florida, many mullet fishermen turned their attention to stone crabbing or tourism-related endeavors.

Everglades National Park is the only subtropical preserve in North America and is part of the largest wetlands ecosystem in the United States. It contains both temperate and tropical plant communities, including sawgrass prairies, mangrove and cypress swamps, rare orchids, pinelands and hardwood hammocks, as well as marine and estuarine environments.

The park is known for its rich bird life, particularly wading birds, such as the roseate spoonbill, wood stork, great blue heron and egrets. It is also the only place in the world where alligators and crocodiles exist in the same habitat. Everglades National Park has been designated a World Heritage Site, an International Biosphere Reserve and a Wetland of International Importance.

The western gateway to Everglades National Park is the Gulf Coast Visitor Center in Everglades City. The visitor center's education display area is accessible at no charge. Visitors can purchase tickets to hop aboard daily guided boat trips from Everglades National Park Boat Tours into the mangrove estuaries of the Ten Thousand Islands section of the park. These 90-minute boat trips run approximately every half hour from 9 a.m. until 4:30 p.m. Paddlers can launch canoes or kayaks from the center's docks at no charge, and one of the daytrips on the GPS-marked Paradise Coast Blueway paddling trail begins at the Gulf Coast Visitor Center heading to Sandfly Island. Paddlers should allow at least three to four hours for the trip, as the island (an ancient Native American shell mound) has a nice hiking trail.

Paddlers may obtain the required backcountry camping permits at the Gulf Coast Visitors Center to tackle the Wilderness Waterway, a 99-mile waterway route from Everglades City to Flamingo that is often considered to be the paddling trip of a lifetime. The entire trip takes seven to nine days for paddlers, with no civilization along the route. The Wilderness Waterway may also be traversed by small motorboat, a popular adventure for fishermen and nature lovers.

The park and its surrounding preserve areas provide some of the most unique and easily accessible opportunities for viewing rare flora and fauna in North America – it is home to 2,000 species of plants, many extremely rare, more than 200 species of birds and over 160 animal species.

Along the outskirts of the national park (although not permitted within official park boundaries), numerous private tour operators provide airboat and swamp buggy excursions through the sawgrass plains, swamps and hardwood hammocks that comprise the western Everglades ecosystem.

Everglades City first became famous as a fishing mecca with numerous notable guests checking into the Rod & Gun Club (now called the Rod & Gun Lodge) in its heyday beginning in the 1920s.

Today, backcountry fishing reels in plenty of snook, tarpon, redfish, trout, pompano and many more species. Experienced guides are readily available for Everglades fishing excursions departing from Chokoloskee, Everglades City, Goodland, Marco Island and Naples. These include backcountry flats fishing and deep-sea charters into the Gulf of Mexico. The waters of the Ten Thousand Islands are renowned by fishing enthusiasts around the world, yet the shallow waters and meandering trails through miles of mangrove islands requires local knowledge to navigate. Local guides are recommended.

Kayak fishing is the fastest growing segment of saltwater fishing – and a local guide service, Everglades Kayak Fishing, a division of Everglades Area Tours, provides popular motorboat-assisted trips, speeding kayaks and fishermen deep into the Wilderness Waterway for access to the best shallow water fishing in the 'Glades. Multi-day kayak fishing and camping trips as well as paddling eco trips are also available.

Everglades City provides accommodations for those who enjoy the quiet small town atmosphere as well as the close proximity to nature-based tourism, adventure and fishing activities. The Ivey House Bed and Breakfast provides a pleasant atmosphere, daily breakfast and a swimming pool with tropical garden, as well as guided canoe and kayak trips into the surrounding wilderness. The Ivey House is designated as a Florida Green Lodging. The historic Rod & Gun Lodge provides a lodge atmosphere and restaurant on the banks of the Barron River. Also available are the Captain's Table Lodge & Villas, River Wilderness Waterfront Villas, Everglades City Motel, Glades Haven Cozy Cabins at Miller's World, Parkway Hotel and Marina and several campgrounds on Chokoloskee Island and in Everglades City, Ochopee, Collier-Seminole State Park and the Big Cypress National Preserve. Many visitors to nearby Marco Island and Naples enjoy day trips to the Everglades City area.

The earliest settlers known to inhabit the area around Everglades City and neighboring Chokoloskee were Native Americans, many of them members of the Calusa tribe, whose civilization flourished in the Southwest Florida area 2,000 years ago.

The first modern day settler to Everglades City came in 1868. In 1889, George Storter, Jr. of Alabama bought the area for $800. By 1920, the town was still a small fishing village. Then, in 1923, Baron G. Collier, a New York advertising industry millionaire, began buying land in what would later become Collier County. It became apparent that a road was needed for travel between Tampa and Miami, and Everglades City, due to its location, became the center of the Tamiami Trail road building project – turning the sleepy fishing village into a boomtown. When the federal government ran into delays, Barron Collier offered to finish the road through the Everglades cypress swamps in return for the new County being named after him. The Tamiami Trail was opened to great fanfare in 1928.

Everglades City, known in those days as Everglade, served as the County seat of Collier County. County offices were moved to Naples in 1961 after the devastating effects of Hurricane Donna, which struck in 1960, took their toll on Everglades City. The Storter family home became the Rod & Gun Club in 1925, a gathering place for hunting and fishing enthusiasts – many of them famous, including Ernest Hemingway and Dwight D. Eisenhower. Today, the Rod & Gun Lodge is still run as a lodge and restaurant.

Several of the buildings from this historic era are in use today. The town's old laundry building now houses The Museum of the Everglades, a showcase for the history of the Everglades region – open Tuesday through Saturday from 11 am. to 4 p.m. The town's bank now houses a bed and breakfast inn, and the old recreation center is now part of the Ivey House Bed and Breakfast. On Chokoloskee Island, the Historic Smallwood Store museum recreates the actual trading post, store and post office that opened there in 1906, serving the Native Americans and pioneers who made their living from hunting, fishing and faming in the wild areas of the Everglades and Ten Thousand Islands. This museum features an extensive collection of books, including the well-known trilogy by author Peter Mathiessen, including Killing Mr. Watson, about the story of Ed Watson, an infamous Ten Thousand Islands resident who was gunned down at the store by townspeople after rumors of murders and other ill deeds.

Southwest Florida International Airport is located about one and a half hours north in Fort Myers. The Marco Island Executive Airport offers private jet service and charter flights to and from nearby international airports. Everglades Airpark is Everglades City's general aviation airport. Access from Orlando, Miami, Ft. Lauderdale and Palm Beach is available via the Alligator Alley portion of I-75 to State Road 29. Everglades City can also be reached from Miami via U.S. 41, the Tamiami Trail, designated as a U.S. Scenic Byway and Florida Scenic Highway. This is a two-lane road through the heart of The Everglades, with numerous picturesque places to stop during the drive.

For a free visitors guide, brochure or other information on places to stay and things to do along the Paradise Coast of Naples, Marco Island and the Everglades, visit www.ParadiseCoast.com or call 1-800-688-3600. International visitors may call (239) 225-1013.