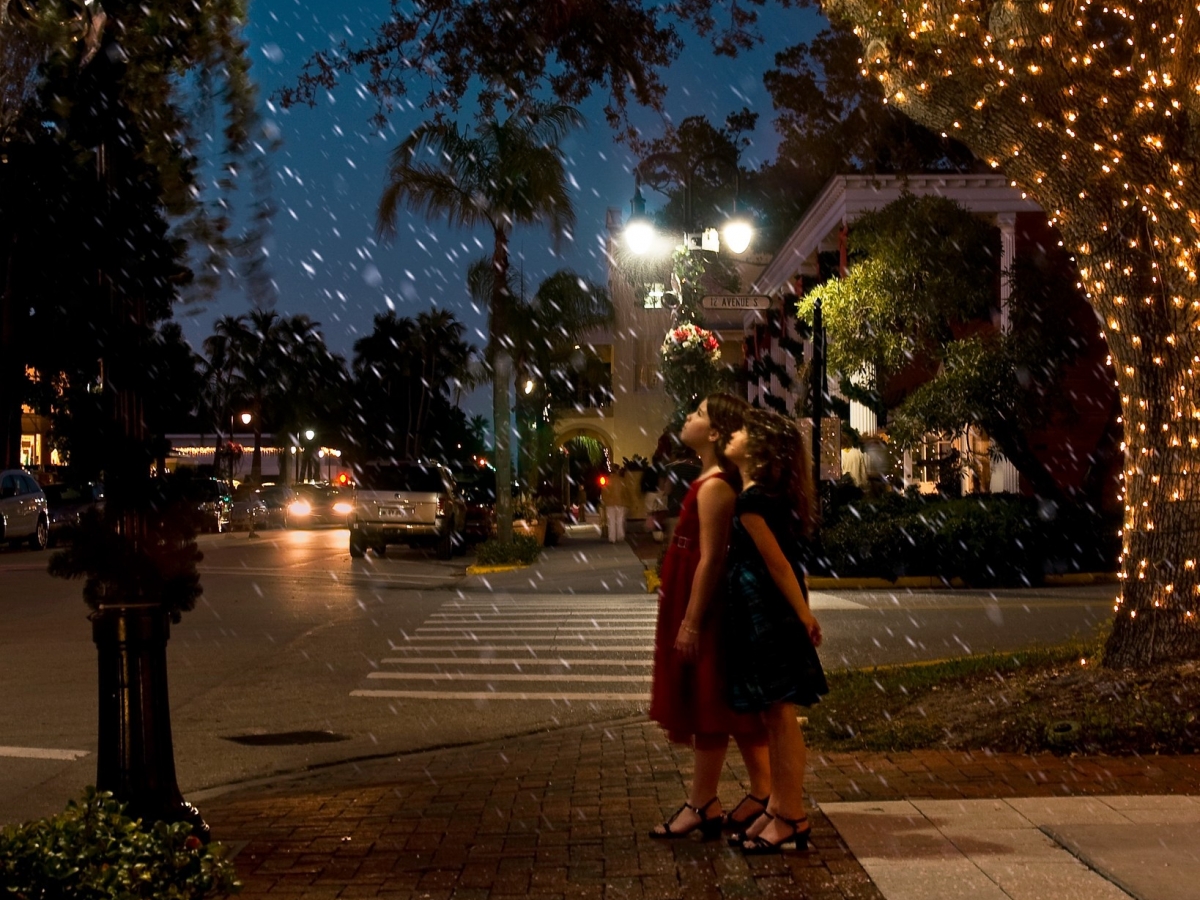 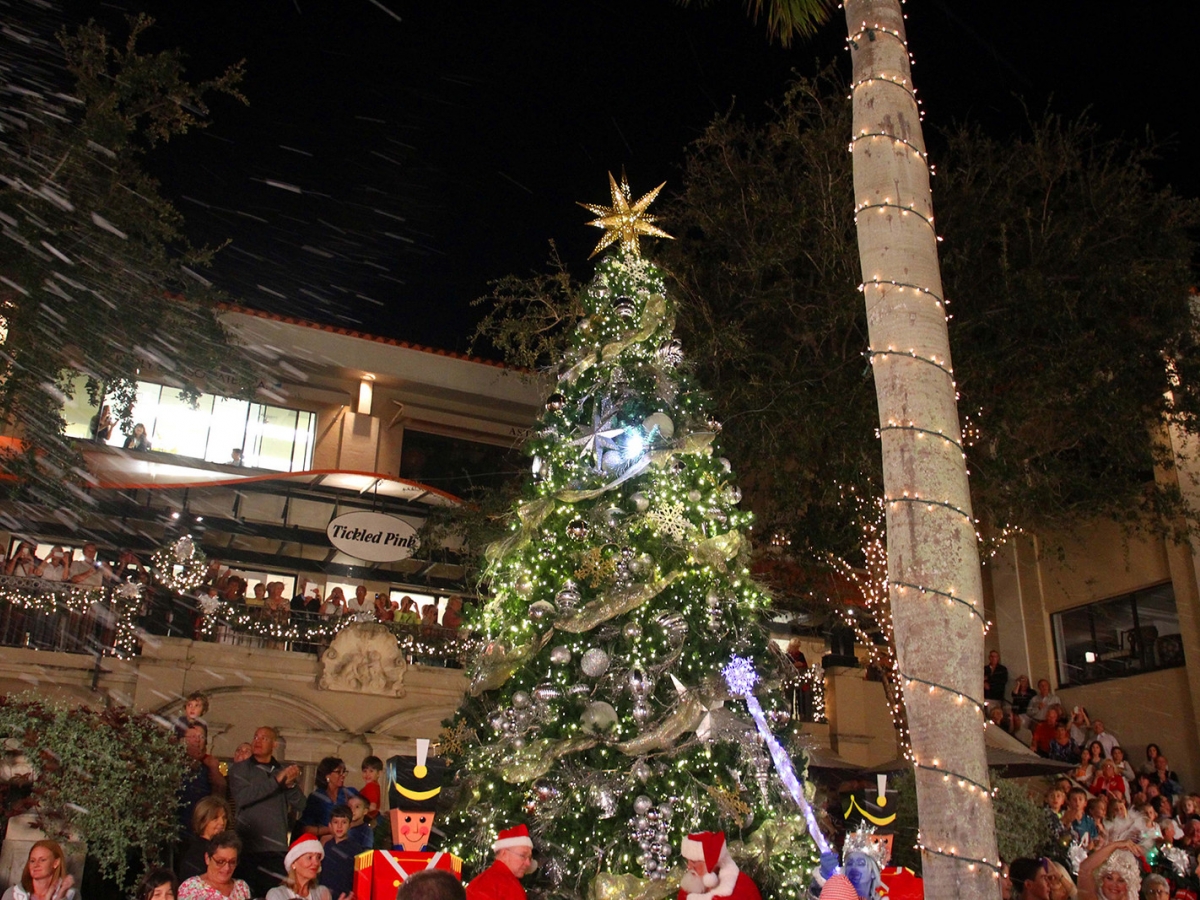 CHRISTMAS ON THIRD will be joyful in a different way this year. Third Street South has music, snowfall, holiday displays and happenings not just for Thanksgiving week but throughout Christmas and New Year's. This will allow Neapolitans and visitors to come in smaller groups all season long with plenty of room to be joyful safely.

For everyone's safety, and because so many of the musical and other groups who participate cannot do so this year, it is regretfully not sensible to have the crowded Street Festival the night of November 23rd.  Instead we happily announce the following:

Listen to the Christmas music and be covered in snow from time to time. From November 23rd throughout Thanksgiving Week (except Thanksgiving Day), there will be live music staring at 5:00PM and snowfalls at 7:00PM every evening.

Find the enduring magic of an Old Naples Christmas continuing through to Christmas and New Year's Eve with live music at Third Thursdays on Third and strolling carolers on Tuesdays and Fridays. Snow will fall at 7:00PM on these evenings as well.
Shoppers, diners, and visitors stroll along Third Street South to the sights and sounds of Christmas. Christmas tableaux, decorations, and music can be found amidst the lush landscaping that is always part of the Third Street South charm. These scenes will make wonderful holiday photos for you and your family.
NEW! NEW! We are announcing The First Annual Third Street South Spectacular Store Window and Overall Restaurant Decorations Contest to be decided by public vote, in person and via online voting. The contest will start at 12:00PM on November 23rd and end at 2:00PM on December 20th. The $1,000 prize will be awarded on December 21st to each of two categories: Most Wonderful and Imaginative Store Window Decoration and Most Wonderful and Imaginative Overall Restaurant Decoration. Instructions on how to vote will be available in all the stores of the Third Street Merchants Association, at the Concierge Kiosk and at www.thirdstreetsouth.com. Come vote, photograph your favorites and join us in sending your choices out into the world via social media.
All those who vote for their favorite restaurant and store decorations will be eligible for a Raffle. The winner of a Third Street South Holiday Gift Box of Third Street treasures will be announced on December 22nd and notified to their email.

***In keeping with Third Street South's commitment to both a wonderful time and best safety practices for everyone, Christmas will be kicked off for 2020 by a small group only led by the Mayor and Santa Claus. The brief ceremony will be streamed on social media and covered by television so that everyone can see the launch of the season safely at home or with a few friends.***

Information will continue to be forthcoming and updated on the Third Street South website (www.thirdstreetsouth.com) as well as on other social media and elsewhere so that you will know all the ways that Third Street South is wishing everyone A Merry Holiday Season.

Third Street South, where Naples began, and where the history, charm, and glamour of Naples is still, will be bringing you a respectfully safe and joyful holiday time, in the spirit of Christmas and of helping to ensure the long-term vitality of our region and health of our citizens. 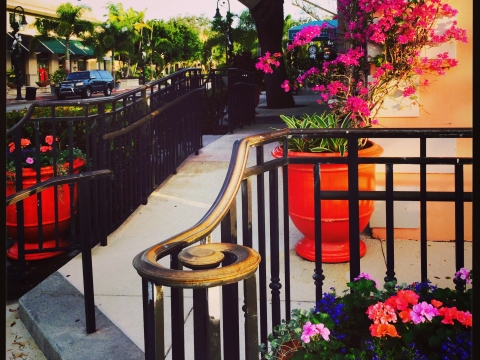