Enjoy the freshest fish imaginable when local chefs cook up fish that came off your own hook. 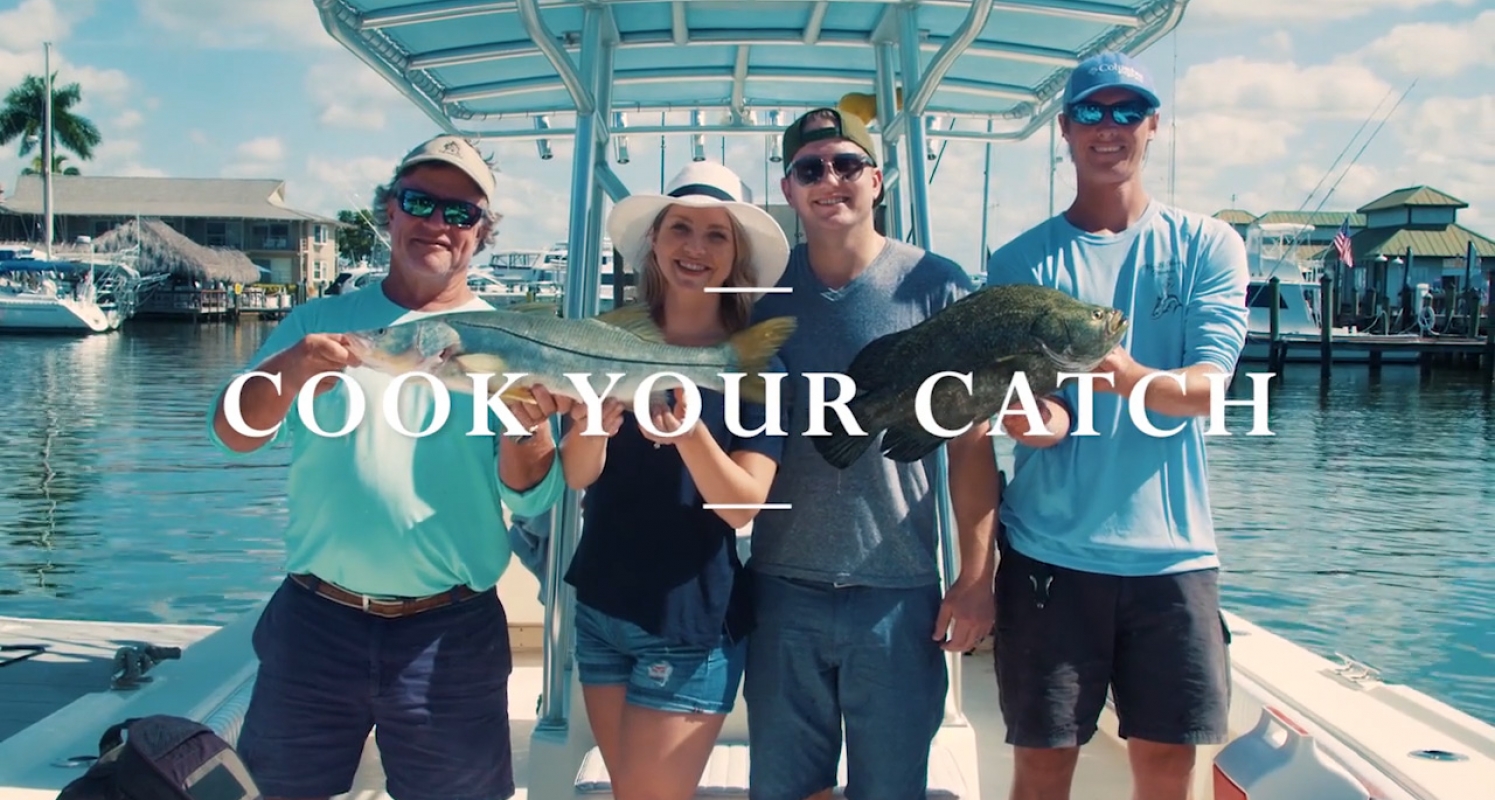 Stephanie Roberts gave her husband Jordan a fishing trip for his 30th birthday. Down from Michigan, they wanted to eat what they caught.

It’s good they chose Naples. The city and nearby Marco Island are not only flush with fishing charter operators, but several restaurants in the destination will “cook your catch.” They prep, cook and serve (with sides) filets of just-caught fish to anglers who have experienced the thrill of fishing the waters of Florida’s Paradise Coast.

What a terrific bonus — one you don’t often find in upscale destinations. Imagine you’re visiting from out of town, staying at a resort, and book a fishing trip to go along with golf outings, lounging on the beach or other diversions. You catch a keeper, meaning it’s in season and within the allowable size limit of state fishing regulation. You salivate. What now? Buy a hibachi and grill it on the balcony of your suite? Uh…don’t think so.

That’s where restaurants like The Dock at Crayton Cove, Riverwalk at Tin City, Bay House, Snook Inn,  Kelly’s Fish House, Pinchers and others come in. These eateries offer visitors the opportunity to eat the freshest fish imaginable — fish that came off their own hooks.

The above scenario is precisely what Stephanie had in mind. While still in Michigan, she contacted Captain Mike Bailey of Ms.B.Haven Fishing & Eco Charters, who informed them that they could, in fact, eat their catch. He arranged the feast with The Dock at Crayton Cove, a local favorite for over 40 years located on the downtown Naples waterfront and outfitted with boat slips.

There was, of course, a catch: no fish, no meal.

It was a November morning fit for postcards when the Roberts’ arrived at Ms.B.Haven at 6:30 a.m. A cool front had moved through and the air was crisp and fragrant, the breeze brisk, the sun gleaming. The Michiganders were in shorts and matching gray Sperry Topsiders. Both 30, they had celebrated their first anniversary in the summer.

The couple boarded the 25-foot center-console boat. Captain Mike and his mate, Robert Holzinger, eased them toward the Gulf. Jordan and Stephanie basked in the ride, hugging close, taking in magnificent views.

Robert applied his deft net-casting skills to catch some baitfish. Stephanie helped scoop them off the deck and throw them in the bait well. After awhile, Captain Mike barked, “Wanna go fishin’?”

A few miles offshore, Capt. Mike and Robert anchored at one of the area’s artificial reef complexes, a habitat for dozens of fish species. That’s all well and good, Stephanie said, but what is the catch we really want? After some discussion, it was decided — snook. The state of Florida does not permit commercial harvest or sale of snook, but it’s legal for sport fishers to catch and keep according to strictly enforced seasons and size limits. Luckily for Stephanie and Jordan, snook season was open. It’s revered as one of the best tasting local game fish.

“Come on, fish, come on,” Capt. Mike murmured. Then a rod bent, the reel went zzzzzzzz.

Mike and Robert set up the fishing rods and Jordan and Stephanie casted into water that was 34 feet deep. Hope was afloat. They waited. Waited some more. “Come on, fish, come on,” Capt. Mike murmured. Then a rod bent, the reel went zzzzzzzz. Stephanie brought in the day’s first catch, a little mangrove snapper. It was well short of being a keeper, but it broke the ice.

A while later, a rod bowed big time. Robert wrestled with it for a bit. An urgent energy kicked in, all eyes on the water. “This could be our fish,” he exclaimed, then handed the rod to Jordan. With a little coaching, the birthday boy reeled a beauty to the side of the boat, where Robert scooped it into the net.

A big, gorgeous snook. But big enough? It had to fall into the allowable “slot” of 28 to 33 inches. After a quick measurement, Capt. Mike announced, “Twenty nine point five inches!”

Cheers erupted. The couple had their keeper. Remember, snook in the allowable slot size can only be kept during various open seasons. Currently, snook may only be kept in Florida's Paradise Coast region from the area south of Gordon Pass at the southern end of Naples and through Marco Island and Everglades National Park. Snook season remains closed in Naples north of Gordon Pass and for most of the rest of the Gulf Coast through May 31, 2020.

Your captain will be able to tell you if they are legal to keep or if you need to release the fish. If you're fishing on your own, you need to check the current regulations.

“I’m very excited to eat that,” Jordan said dryly. Then it was back to fishing.

After stopping at the Ms.B.Haven dock and watching Robert clean and fillet the snook and a tripletail, our Michigan couple showed up at The Dock with fish filet-filled plastic baggies in hand. The restaurant staff was waiting for them.

There was only one thing left to do: Dive in and eat their catch.

“It doesn’t get better than this right here,” Stephanie said between bites.