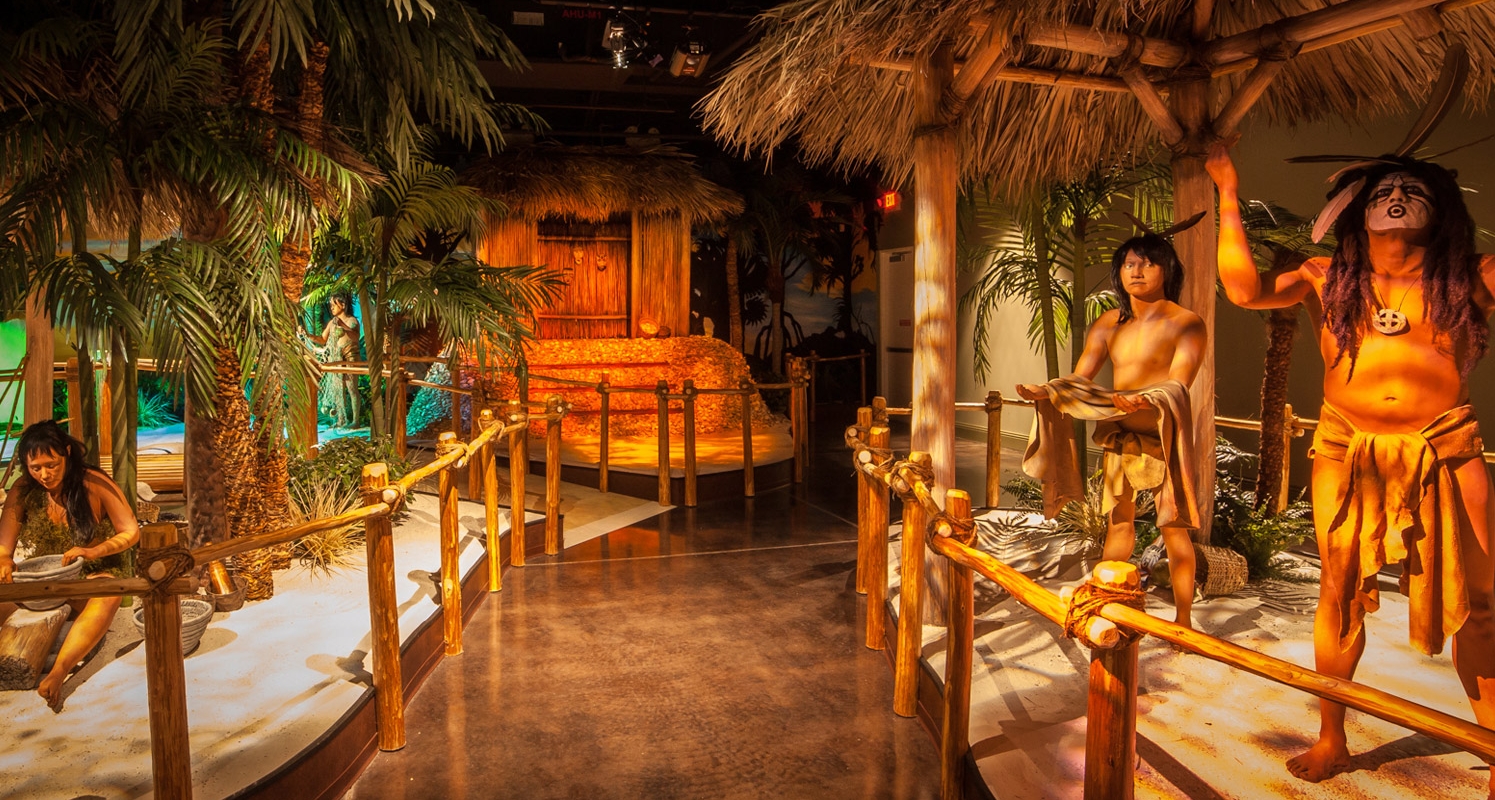 For an excellent overview of the intriguing history of Florida's Paradise Coast, visit the Collier County Museum in Naples.

The museum's exhibits show what the area was like more than 10,000 years ago, when Paleoindians as well as mastodons, camels, mammoths and huge herds of bison and deer roamed the area. Also learn about the Calusa and Seminole Indians, and the first pioneers who moved to Southwest Florida. On the museum grounds you can also see our native gardens, restored Naples cottages, the archaeology lab, Seminole village or Calusa Indian camp.

Head south to Marco Island and visit the Marco Island Historical Museum depicting the fascinating history of Marco Island from its ancient civilizations to the modern era. On display now is an amazing collection of loaned ancient artificats that were actually discovered right on Marco Island. The loaned artifacts are featured within the museum’s award-winning permanent exhibit — Paradise Found: 6,000 Years of People on Marco Island. Now serving as the star of the exhibit is the Key Marco Cat, one of the finest pieces of Pre-Columbian Native American art ever discovered in North America and several other ancient artificats that were all uncovered in a Smithsonian archaeological dig on Marco Island in 1896. These remarkably well-preserved ancient treasures are on display now through April 3, 2021 in cooperation with the Smithsonian Institution.

But who says you have to stay indoors to learn about history? In the afternoon, hop on board with Marco Island Boat Tours to visit nearby mangrove islands that, along with Marco Island, was home to the ancient Calusa tribe and their Muspa ancestors. The shelling on these deserted islands' beaches can't be beat.

From Marco Island, head inland to the Tamiami Trail. This 50-mile segment of U.S. 41 from Collier-Seminole State Park to Big Cypress National Preserve passes by pioneer-era towns, mangrove forests, cypress strands and sawgrass prairies. At Collier-Seminole State Park, you can see a "walking dredge,"  considered a marvel of modern engineering used in the late 1920s for the construction of the Tamiami Trail. Or walk the nature boardwalks in Fakahatchee Strand Preserve State Park and Big Cypress National Preserve to see what Florida's Paradise Coast was like for the Calusa Indians some 2,000 years ago.

Stop in at the Everglades National Park Gulf Coast Visitor Center. Rangers here provide adivice on exploring the Ten Thousand Islands saltwater wilderness along with backcountry camping permits for sites along the 99-mile Everglades Wilderness Waterway, which include raised wooden platforms known as chickees as well as beach islands. From the center you can hop on board one of the regularly scheduled sightseeing cruises to experience the saltwater portion of the park, or find some excellent ecotour or fishing guides in town to guide you on your own private adventure.

Drive across Chokoloskee Bay on the causeway to the Historic Smallwood Store, filled with artifacts from its days as the post office and trading post for turn of the century pioneers, native Americans and infamous outlaws. Next, back out on Tamiami Trail, stop at the Ochopee Post Office, the country's smallest. The structure was originally an irrigation pipe shed, but became an official post office facility after a fire burned Ochopee's post office and general store in 1953.

When you leave Everglades City, trek north to Immokalee for a last historic treat – the Immokalee Pioneer Museum at Roberts Ranch, one of the oldest historical cattle ranches in continuous use in Florida.